Showing posts from November, 2017
Show All

On the very edge of the Central Complex 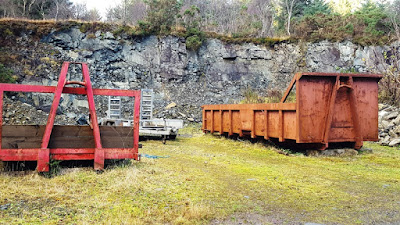 Had about half an hour at lunchtime when in Salen so I decided to have a stroll up part of Cruach Torr an Lochan, the prominent hill between Salen and Gruline. There is a path that leads up the hill, muddy in places but straightforward. Only had time to go a short distance.

At this point we are right on the edge of the Mull Central Complex. If you look at the geology map you will see a really complicated bit in the middle and lots of simpler geology to the north. The complicated bit is the Mull Central Complex - the stuff to the north is mainly basalt lavas and minor intrusions. By walking up this path, you are actually right on the boundary between the two, near enough.

Also in this area are two quarries that are mentioned in the GA Guide that was published in the late 60s. The GA Guide refers to them as part of the Knock / Loch Ba excursion. I decided to have a look


Quarry is in basalt lavas and gets used for storage these days. The quarry face has a lot of calcite vei…
Post a comment
Read more 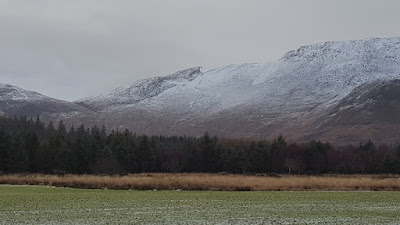 Weather today was pretty wild and wintry   a day for staying down low! Took a walk along the track beside Loch Ba as far as Glen Clachaig - there is some great mountain scenery in the area and of course it is the location for the world famous Loch Ba Ring dyke. I wanted to have a look at the hills with a bit of snow on them as it often brings out detail that is hard to see otherwise. The pictures below give an idea. Click on the images to see them larger!

Moving on to the track by the loch, the weather started to clear but was still quite wild:


View up the loch!
Moving on this prominent hill is on the RHS:


The LBRD runs through this un-named hill down to the loch side. The exposed rock sene at the top is the felsite with basic inclusions that makes up most of the dyke. There are also some noticeable parallel gullies running across the hill. I havent been to investigate these, but they might be dykes of the…
3 comments
Read more 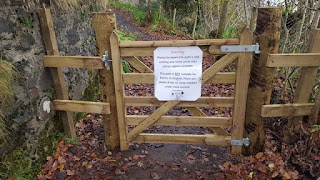 Took a stroll along the newly repaired Lighthouse path that goes to Rubha nan Gall. Great views over to Morvern, up Loch Sunart and over to Kilchoan. I wanted to have a look at the geology esp since if there had been some digging going on during the path upgrade, then there might be some goodies to see.  Here in pictures is what you can see on the path. Of historic interest, this is the location where Prof Heddle discovered the mineral Tobermorite.

The new gate on the path
A bit further on, there are some neat dykes on the shore at Rubha na Leip:

The smaller of the 2 dykes, about 0.5m across

The larger of the dykes - about 3m in width and showing very pronounced columnar jointing.Both dykes run NW-SE - Classic "Mull Swarm" stuff.
Further along the path there are some interesting amygdales to be seen in the cliff face above the path. Some of the rock here has been recently excavated so is quite fresh. 50p for scale. It was in amygdales that Prof Heddle found Tobermorite, but …
1 comment
Read more
More posts