April 08, 2018
Had a little bit of time today while down in Iona doing some other work, and as the weather was good it seemed a good opportunity to go out and have a look at the north end of Iona for a change. I havent spent as much time in this part of the island as I have in the south so it felt like a good chance to do some familiarisation. 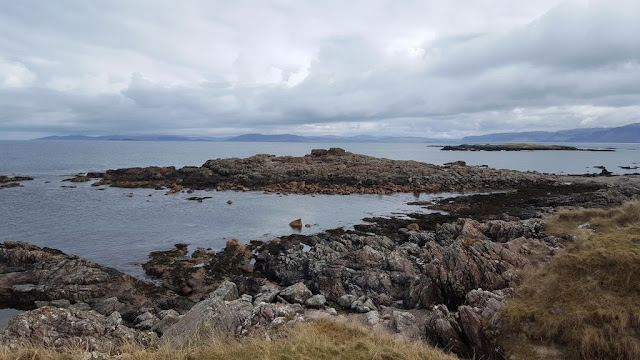 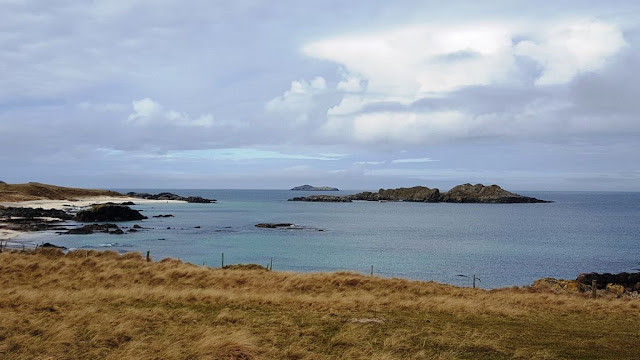 Stac Mhic Mhurchaidh in the distance there, behind Eilean Chalbha. SMM is a columnar dolerite, probably of Palaeogene age, Eilean Chalbha like most of Iona is Lewisian so much older

What I really wanted to look at was the "basal conglomerate at the base of the "Iona Group" rocks. The Iona Group used to be described as Torridonian but modern research tends to suggest the term "of Torridonian affinity" as they are not quite like the classic Torridonian rocks of the North West. Still quite enigmatic and not totally understood

Some pics of the conglomerate: 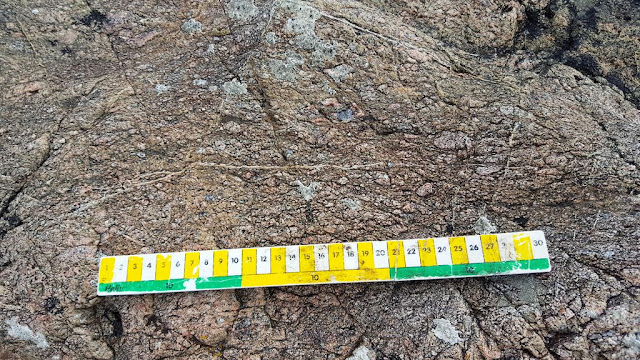 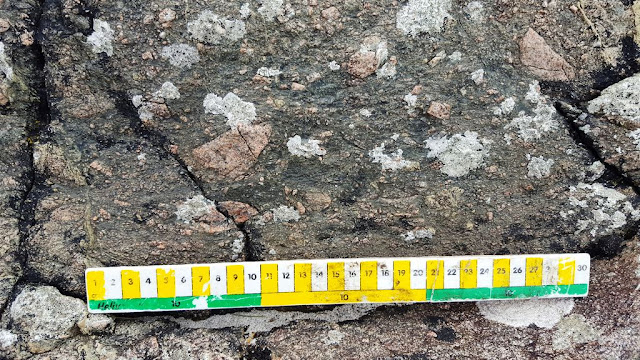 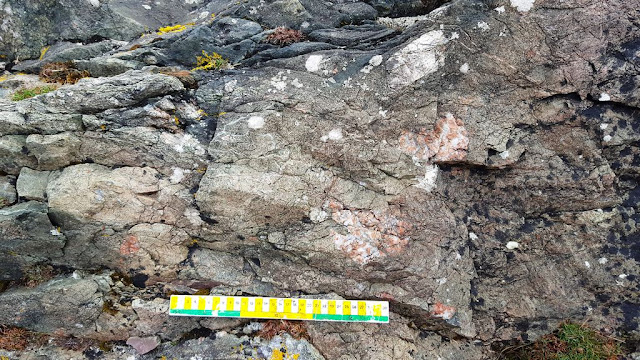 Near the base and the contact with the Lewisian, some of the clasts are quite large. I should have had the 2014 paper by McAteer et al (Sedimentary provenance, age and possible correlation of the Iona Group
SW Scotland) as it contains a lot of info on these rocks.Anyway, can come back another time and look at it in detail 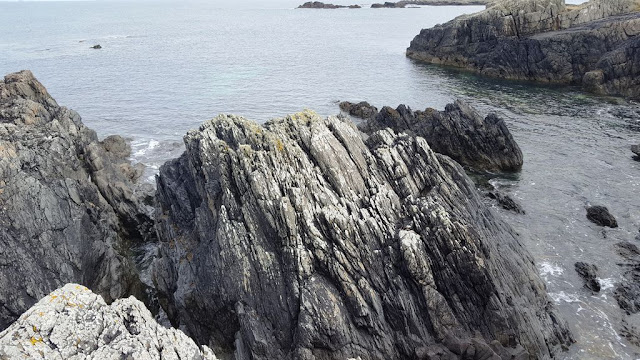 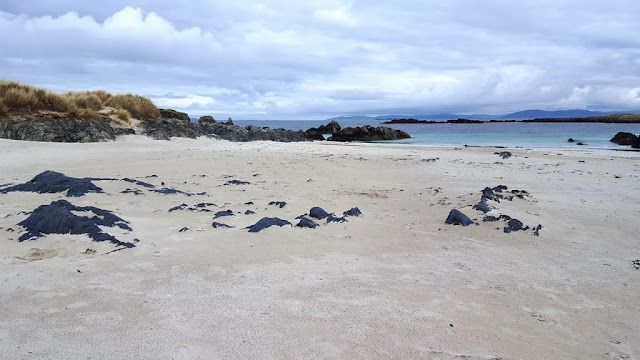 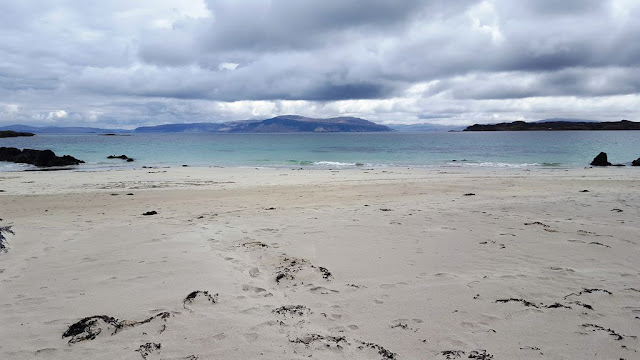 Here is a video showing the view:

There are all sorts of interesting boulders on the shore, many of which are Ross of Mull Granite. Also some garnet amphibolite - the sort of rock that is common at Ardalanish and Uisken 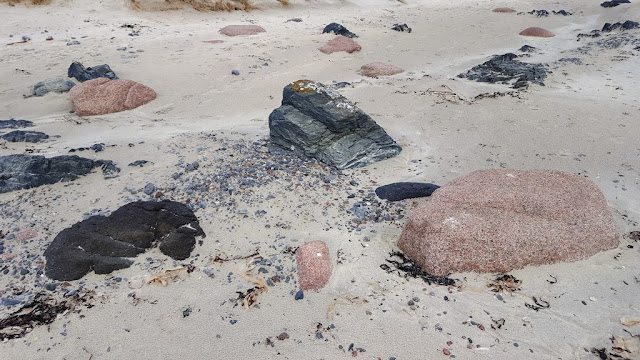 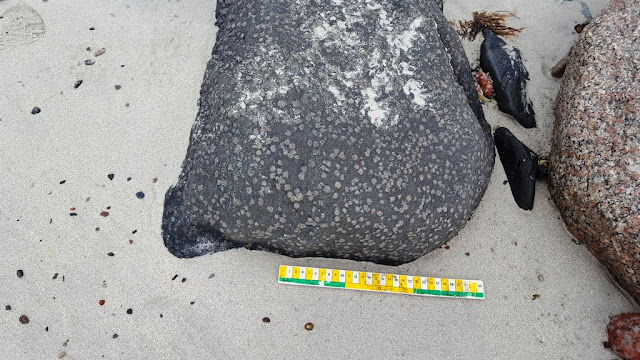 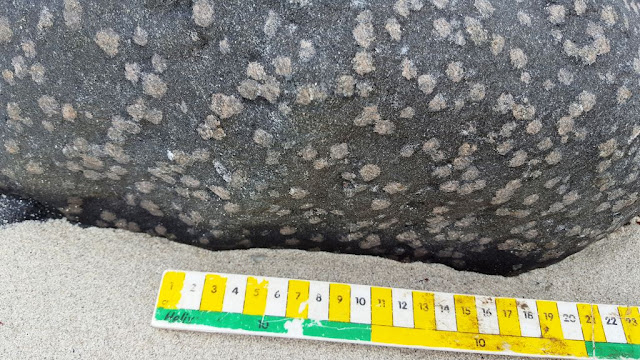 
Some of the Ross of Mull Granite is quite coarse - looks like the RM2 type - the stuff that has large K-feldspar phenocrysts: 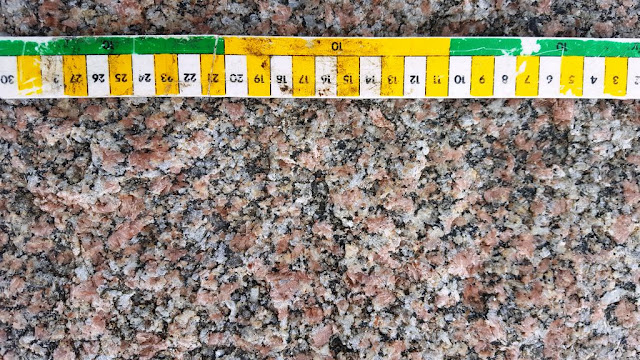 
Running E-W approximately, there is one of those Camptonite dykes, marked on the BGS map, as "Lc". This one has eroded out to produce a long sinuous ravine: 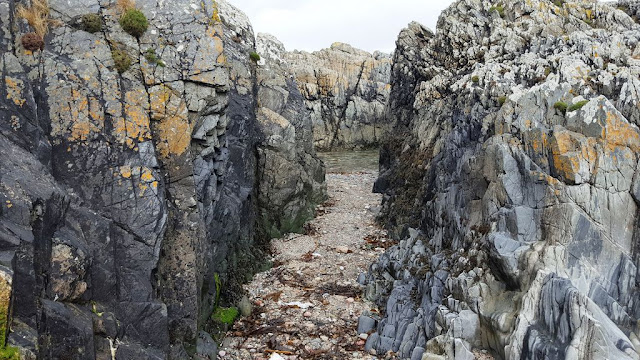 It really is an obvious feature, intruded into both the Iona Group rocks and the Lewisian. BGS map suggests that these are of Permian age. Lots of these in Iona esp on the east side - most of them seem to erode out rather than stand up like a wall. The dyke rock is clearly visible in various places in the bottom of the channel

Finally it was time to leave - just a couple of shots to show how clear the water looked: 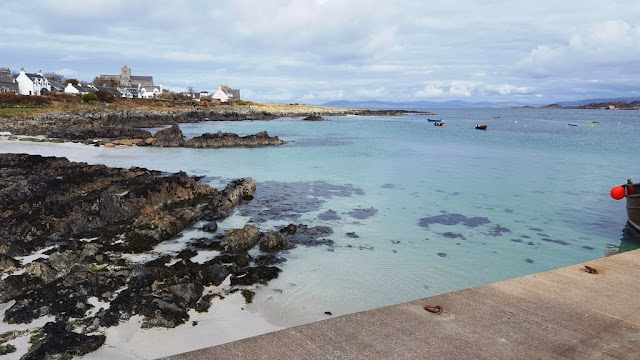 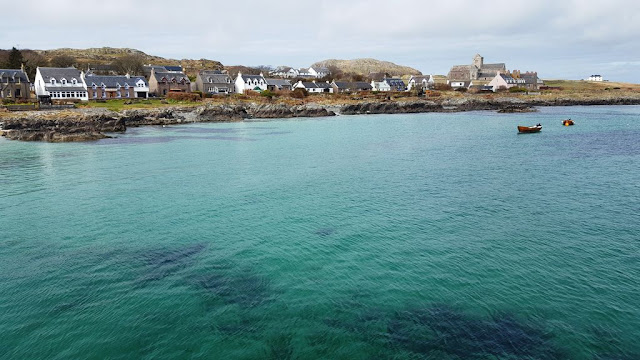 Last picture taken from the ferry 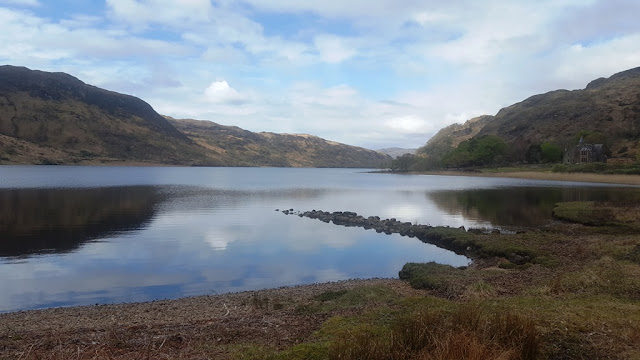 Today was looking good weather wise so it was a good opportunity to get back down Loch Buie  / Loch Uisg way and spend some time wandering looking at rocks!  It was a while since I had been up at the area that formed a major part of my MSc so a bit of re-aquaiting was needed The Gleann Beag Intrusion (as I referred to it) is unusual - it is picritic, very fresh, contains huge amounts of olivine, the olivine is highly magnesian, up to 91.5 % Forsterite and the rock in many places displays tremendous layering. There are other neat features as well as the pictures will show. On the BGS map, the intrusion is shown as a sinuous dyke of the Mull Swarm but there is more to it than that. Anyway, here are a few pics of the trip. These are only a few of the total number of photos I took, just to give a flavour of what the rocks look like: Loch Uisg, looking serene Its a bit of a haul up by the Allt a'Bhacain Seilich but it gets you to the high ground of the Laggan Peninsula
Read more 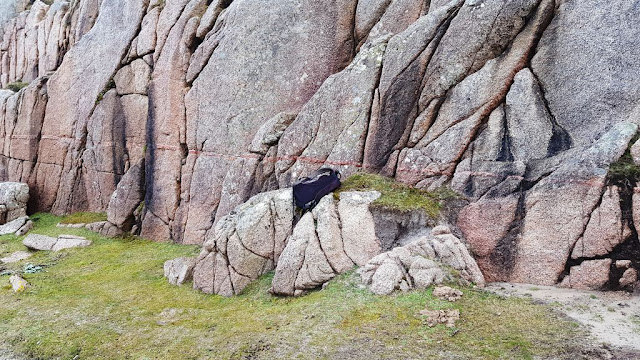 Final day of the short geologising trip to explore the Ross of Mull Granite. Classic locations, today's was one of the best - Knockvologan and the coast opposite Erraid Island. Bitingly cold wind but beach was deserted. After spending the morning there I went up to Bendoran Cottage to have a look at the other classic ROMG/ Moine contact on the hill behind the cottage. More of that later, but here are some pics of the Knockvologan area with some brief details (I used the VMSG 2017 Guide. I was on the VMSG field trip last year and Knockvologan was one of the places we visited. However there were a few locations that werent included then so I had a look today) First stop to look at the distinctive aplite vein running through the granite near the shore  The aplite vein runs across the rock face  In close up The granite is very coarse with large K-feldspar phenocrysts. RM2 facies The area is famous for the diorite enclaves in the granite. All sorts of interactions and
Read more